Maintaining Balance in Pursuit of Ambition

Mercury has been retrograde in Capricorn since late December. Since then, we have been reflecting upon projects and goals rather than actively pursuing them. Machinery may have been faulty, communications may have been unclear or downright unpleasant. We may have experienced frustration at where we are in life and what we have achieved.

The good news is, Mercury’s retrograde is coming to an end! In this article, you will find out how to make the most of the transit as it comes to its close.

Mercury stations direct at 8º Capricorn on January 18, 2023 (shortly after Mars stations direct a few days earlier). When a planet “stations” retrograde or direct, it means it is stationary as it changes direction. I call these stations “pivotal days,” because the planet we’re talking about is literally pivoting—and also because stations tend to lead to pivotal events for those of us Earthlings who are being affected by them.  Those pivotal events will trigger changes in us, and that will happen according to the nature of the transiting planet. In this case, we’re talking about Mercury.

Mercury will remain at 8º until January 22, 2023. At this point, it will begin its slow direct movement through Capricorn. By the time Mercury passes the point at which it originally went retrograde, it should be moving at a normal clip again.

Energy peaks when a planet stations. Consequently, if you have a planet near the degree at which Mercury stations direct, you will feel this transit very strongly. For example, if you have Venus at 10º Capricorn, you’ll feel Mercury’s influence the most strongly when Mercury is passing through 10º, and also when Mercury stations direct. This is also true for natal planets that are close to 8º in any other Cardinal signs (Aries, Cancer, Libra), as they all form hard aspects to Capricorn. 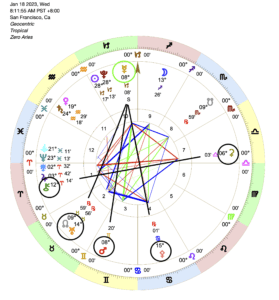 As Mercury goes direct in Capricorn, it trines Uranus and the North Node in Taurus. The universe is telling us to find a new and better way to vent our frustration and achieve our goals. Rather than succumb to destructive impulses, we should refresh our mindset and work in a steady, stable fashion, patiently applying ourselves and reaping the fruits of our labor.

Mercury in Capricorn wants to plan ahead and achieve its mission. It wants to communicate with authority and integrity. On top of that, it wants to maintain a flawless reputation. Mercury Retrograde in Capricorn may have resulted in some unwanted glitches in reputation, or frustrations in clear and effective communication. Our relationship with authority figures may have been affected.

Understanding the Mercury cycle is incredibly useful
for help in staying organized, running your office
and all forms of writing and communication.

To learn how Mercury functions in your chart
and how to use the retrograde cycle to your advantage,
contact Pandora Astrology for a Natal and Transits Reading.

At the same time, Mercury is in a tight quincunx with Mars in Gemini. The quincunx is a seemingly irresolvable aspect, promoting an erratic, one-or-the-other mentality. Consequently, you may feel angry with no understanding of why on this day. Your source of energy may be hard to connect to, and your attention span may be difficult to manage. Additionally, your ability to communicate anger and to assert yourself will be challenged.

Mercury in Capricorn is concerned with order and integrity, and maintaining professionalism and authority. Being in a Cardinal Earth sign, Mercury desires productivity and clarity. Yet, its retrograde status has made that exceedingly difficult to achieve. Meanwhile, Mars in Gemini is scattered, impatient, and cerebral. Its attention span is pulled in multiple directions. Mars in a Mutable Air sign prefers thinking and talking rather than doing.

Thus, the tension between these two planets may cause us to feel extreme impatience and agitation. Likely, we will have trouble focusing on the task at hand. In order to avoid the worst of this day, it is important that we maintain mindfulness of our words and our actions.

As Mercury goes direct, it squares Chiron in Aries and Ceres in Libra, and loosely opposes Pallas Athene in Cancer. This tense configuration underlines our collective desire to achieve our goals and the frustrations surrounding this pursuit.

Mercury in Capricorn wants to achieve in the old school way. It wants to stay organized, build something real, and operate professionally. Meanwhile, Chiron in Aries refuses to submit to authority and desires autonomy.

At the same time, Ceres in Libra desires partnership, collaboration, and social harmony. On the other hand, Pallas Athene in Cancer reminds us of the importance of soul fulfillment, loving connections to our fellow humans, and emotional intelligence.

We will have to find a way to balance all of these conflicting energies as we reorient ourselves towards our goals.

Does Mercury’s Station Affect Me?

If you have a planet in your chart placed between 3º and 13º of a Cardinal sign, you’ll feel Mercury’s station very personally.

This is also true if your birthday falls in any of the following date spans:

Here’s the post we made when Mercury went retrograde: Mercury Retrograde in Capricorn.

If this retrograde cycle as been especially challenging for you, or if you are just curious to learn more, a professional reading is the best way to get tailored information to your chart.

To learn how Mercury functions in your chart and how to use the retrograde cycle to your advantage, contact Pandora Astrology for a Natal and Transits Reading.

Or try casting your own chart and looking at it yourself.