A Tale of Patience and Anger

Mars has been retrograde in Gemini since late October. Since then, we have been reflecting upon and redoing hasty words and scattered actions. The retrograde has likely been a particularly volatile and rash period. We have had to be careful not to lose our tempers and make impulsive mistakes.

The good news is, Mars’ retrograde is coming to an end! In this article, you will find out how to make the most of the transit as it comes to its close.

Mars stations direct at 8º Gemini on January 12, 2023. When a planet “stations” retrograde or direct, it means it is stationary as it changes direction. I call these stations “pivotal days,” because the planet we’re talking about is literally pivoting—and also because stations tend to lead to pivotal events for those of us Earthlings who are being affected by them.  Those pivotal events will trigger changes in us, and that will happen according to the nature of the transiting planet. In this case, we’re talking about Mars.

Mars will remain at 8º until January 23, 2023. At this point, he will begin his slow direct movement through Gemini. By the time Mars passes the point at which he originally went retrograde, he should be moving at a normal clip again.

Energy peaks when a planet stations. Consequently, if you have a planet near the degree at which Mars stations direct, you will feel this transit very strongly. For example, if you have your Moon at 9º Gemini, you’ll feel Mars’ influence on your emotions the most strongly when Mars is passing through 9º, and also on the stations direct. This is also true for natal planets that are close to 8º in any other Mutable signs (Virgo, Sagittarius, Pisces), as they all form hard aspects to Capricorn. 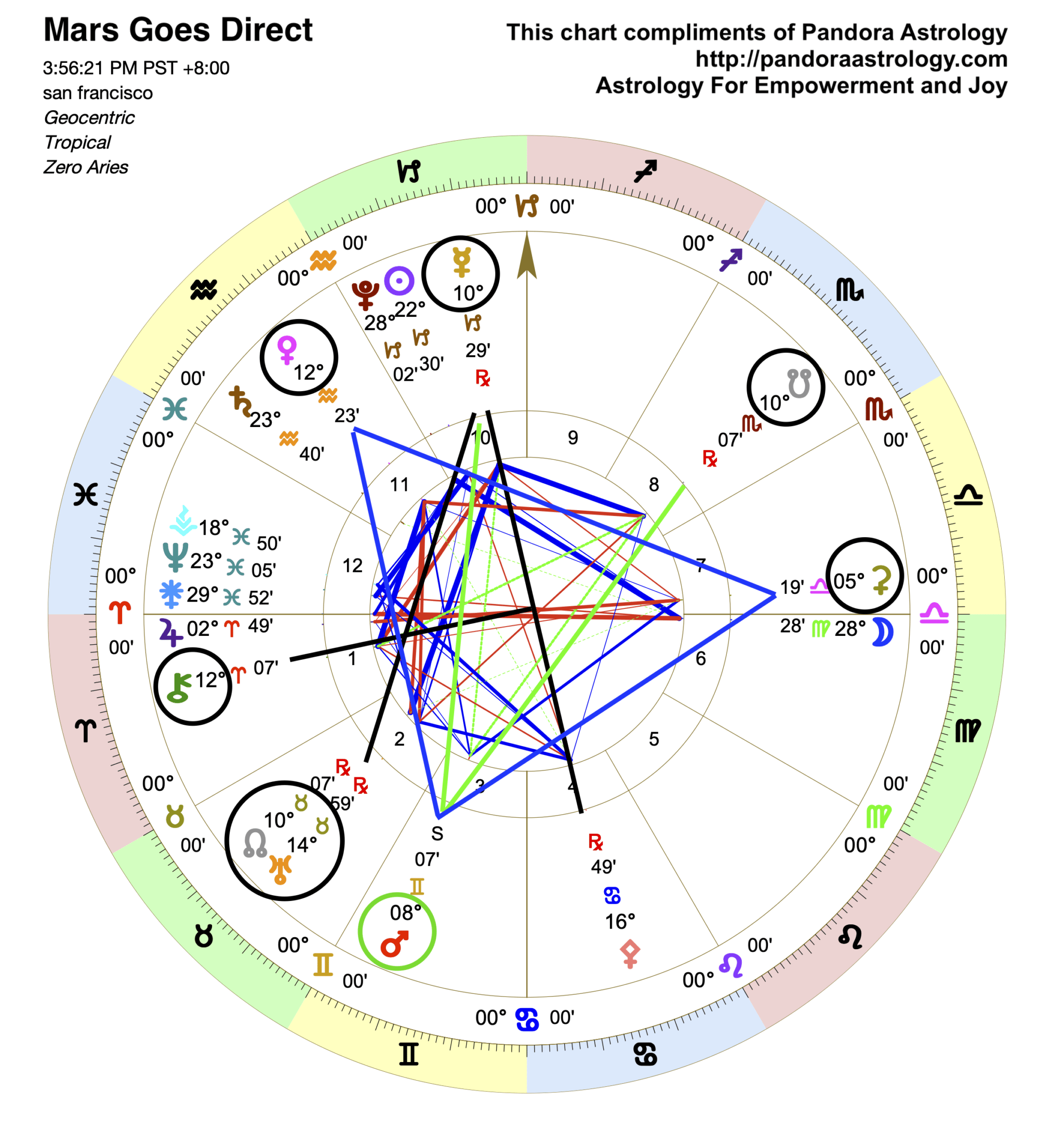 As Mars goes direct in Gemini, he forms a Grand Air Trine with Venus in Aquarius and Ceres in Libra. As such, this Mars is pro-social and reasonable. In this configuration, he is able to come up with win-win solutions and assert his needs in a diplomatic, graceful way.

Mars in Gemini is a quick talker and thinker, and able to make connections and stay emotionally detached enough to maintain a logical stance. His strength is strategic, detail-oriented thinking and the ability to multitask and effortlessly pivot.

Mars in Gemini’s energy can tend towards nervousness and anxiety. His energy is supported by Ceres in Libra’s charm and social effectiveness. Ceres can channel Mars’ nervous energy into helpful and nurturing dialogue. Meanwhile, Venus in Aquarius can also help Mars transmute his intellectual drive into coming up with group-minded, friendly, and humanitarian solutions to any disagreements.

Understanding the Mars cycle can help you
in all of your activities and the fulfillment of your desires.
It can help to clear the source of your energy
and improve your ability to assert yourself.

To learn how Mars functions in your chart
and how to use the retrograde cycle to your advantage,
contact Pandora Astrology for a Natal and Transits Reading.

Mars Stations Direct: Pressure to Fight for Yourself

At the same time, Mars is in a tight yod with Mercury and the South Node. Consequently, you may feel under pressure to assert yourself on this day. Mercury in Capricorn is concerned with order and integrity, and maintaining professionalism and authority. Mercury in Capricorn (also retrograde!) desires productivity. Yet, his retrograde status makes that difficult to achieve. Meanwhile, the South Node in Scorpio desires emotional truth and transformation, but is prone to turbulence and drama.

Mars in Gemini may have difficulty expressing anger or asserting itself directly. Gemini can be dissociative and distractible, and prefers to stay detached and observant rather than inflamed and active. He may also struggle with working productively, finding his attention and energy fractured in many directions. As such, we may experience mental agitation and mounting frustration at the torturously slow pace of events.

Mars in Gemini is ruled by Mercury. So, we can look at Mercury’s condition to understand more about Mars. Interestingly, Mercury is not only retrograde, but is in a trine to Uranus and the North Node in Taurus. At the same time, Mercury squares Chiron in Aries.

The support from Uranus and the North Node suggests that we benefit from embodying the Taurean qualities of patience, emotional stability, self-sufficiency, and simplicity. This is only reiterated by Mercury’s retrograde condition. Chiron’s tense involvement shows that we may experience wounding surrounding issues of impatience and expressing anger. Impatience and anger may arise from issues of autonomy and independence.

The balance of tension and harmonious aspects to Mercury shows us that we have a choice. That is, we can either find a new, more stable way of communicating, or we can lose our temper and inflame past wounds. At this time, we can suffer greatly from any arguments that may occur. Words have an intensified ability to wound at this time, so slow down and practice mindfulness.

Does Mars’ Station Affect Me?

If you have a planet in your chart placed between 3º and 13º of a Mutable sign, you’ll feel Mars’ station very personally.

This is also true if your birthday falls in any of the following date spans:

For more on Mars’ larger retrograde cycle, read about Mars Retrograde in Gemini.

If this retrograde cycle as been especially poignant for you, or if you are just curious to learn more, a professional reading is the best way to get tailored information to your chart.

To learn how Mars functions in your chart and how to use the retrograde cycle to your advantage, contact Pandora Astrology for a Natal and Transits Reading.

Or try casting your own chart and looking at it yourself.