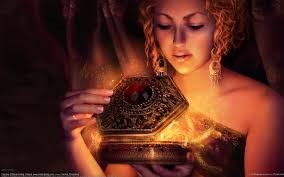 Wasn’t Pandora that curious little girl in the Greek myth? The one who couldn’t stop herself from looking in the mysterious box and let loose all the troubles into an otherwise idyllic world?
Yes.
And yet it’s the perfect name for an astrology practice.
Why?

According to Bullfinch’s Mythology, the name Pandora means “all-gifted.” (pan = all; dora = gift).1

In Roman legend, Prometheus created the first Men from clay. Then Prometheus, himself a god, stole fire from the gods on Mount Olympus and gave it to his creation, that Man might live and be conscious and aware. The other gods were angry that Prometheus dared to give the power of life and consciousness to a lowly creature like man, and so they punished him by chaining him to a rock where each day a huge griffon (or in some versions, an eagle) came and ate his liver from his body. Each night the liver grew back and each day the griffon returned, causing Prometheus endless torment.

Pandora was the first woman. She was created by Hephaestos (his Greek name) or Vulcan (Roman) and given to Man as a punishment for having fire. She was bestowed with all the graces to make her tempting to Man, but she was also intended to be his ruin.

At this time, humanity lived an idyllic existence, much as Adam and Eve did in the garden before the fall. Prometheus kept in his house a box in which all the evils of the world were sealed away. He told Pandora to stay away from this box, but without telling her why. As soon as he left, her curiosity overcame her. She opened the lid and out flew Trouble, Mischief, Pain, Poverty, Sorrow and every other imaginable evil. Horrified, she closed the lid quickly, but not fast enough to capture anything except Hope, which was at the very bottom of the box.

Today in modern life, we are used to discounting myths as merely fairy stories. But the stories we know of today were once not myths, but true religious mysteries, endowed with as much awe and power as we experience when feeling the mystery of the sacrament. And stories are retold and reshaped by the conquerors. The myth of Pandora is an example of a story which changed shape in the telling.

Originally, Pandora was not a mortal woman, nor shaped by a god, but was herself an Earth-goddess. She was a deity of the type classicists call a “culture-bearer.” It was her purpose to appear to humanity and to pour out of her vessel all the things necessary for civilization: weaving, pottery, and so forth.2 She taught humanity how to live together on the earth and poured out her gifts upon them. And today she is remembered as a curious child.

In my opinion, both aspects of Pandora belong in an astrology practice. To me she is and always will be both the curious, willful child and the loving, benevolent goddess. I’ve always found people fascinating, and astrology affords an excellent way to “lift the lid” on a person’s character. And who better than a curious goddess to discover and uncover and in some cases, recover, the gifts of a client through astrology?

Pandora, the Giver of Gifts

And around here, in my astrological practice, Pandora says to every client: “Let me pour out the gifts of your personal universe. Look, here are your talents, here are your challenges. You have everything you need for your journey. Look how beautiful the drama of your life is. Here is the path—you are equal to it. Now: walk.”

Here are some seminal posts on the Pandora Astrology Blog:
Do You Wish There Was An Owner’s Manual For Your Life?
You Are Not Just Your Sun Sign
I And Thou (this is just between us and it’s personal)