A Pretty Woman Transforms Into A Gracious Lady

Venus Retrograde 2018, in Scorpio and Libra

In October of 2018, Venus, the planet of relationships and values, will begin yet another retrograde journey. This happens about once every 18 months and lasts about six weeks. This time, Venus turns retrograde at 10º Scorpio and will travel backward to the beginning of Scorpio and then dip into Libra, to finally stop at 25º on November 16th. There she begins moving forward again. During this retrograde period, Venus will form a sextile to Saturn and an opposition to Uranus; these events will impact how this Venus retrograde period feels for all of us who are experiencing it.

As Venus begins traveling forward again, she will form many of these aspects again, in reverse order, like this:
November 18 – 27, Venus back in that yod with Chiron and Juno
November 30: Venus opposes Uranus
December 2: Venus re-enters Scorpio
December 16: Venus sextiles Saturn
December 17: Venus returns to 10º Scorpio, the place where her journey began 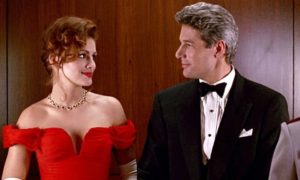 The popular movie Pretty Woman, released in the early 90’s, is a great metaphor for this Venus retrograde period and its lessons, exemplifying Venus’ journey from Scorpio back into Libra and then forward into Scorpio again and illustrating the aspects she forms along the way, so I’m going to use the plot of the movie to describe how this transit may feel as you’re experiencing it. Your miles will vary of course, based on where this transit fits into your own chart, but this more generic explanation may provide some clues about how it feels and how to handle it. The movie itself is a lot of fun to watch, with Richard Gere, already a star at the time, and Julia Roberts, then an up-and-comer, both delivering great performances. It’s a Pygmalion-style fairy tale of a heroine who is transformed from ragamuffin prostitute to elegant society woman, aptly mirroring the journey of Venus and the signs and planets she encounters during this year’s retrograde period.

Vivian is assisted by her friend and roommate, Kit, who has introduced her to this line of work, and teaches her how to survive in the streets. This fits the point in the transit where Venus squares Mars (October 10th), bringing themes of street survival, and then sextiles Saturn (October 24th) bringing lessons in how to have boundaries. At this point in the story, Vivian’s old friend Kit assists her by establishing the rules of the game, such as avoiding real intimacy by not kissing clients on the mouth. Even prostitution has its rules after all and there is a right and a wrong way of doing things.

It’s at this point in the cycle that Venus comes to conjunction with the Sun, which I like to call “Relationship Clarity Day.” It’s often a day when something big happens in the realm of relationship. What happens to Vivian? She meets her future husband, wealthy businessman Edward Lewis, who is lost. At first she attempts to give him directions, but then takes control of his car to help drive him back to his hotel.

Then there’s an unexpected turn of events, which fits with Venus’ opposition to Uranus on October 31st. Edward is taken by the sensual Vivian, and he proposes to hire her for a week as a companion at his fancy business meetings. This offer constitutes a state-based shift, propelling her into a world of higher-end escorting which she’s totally unprepared for. This Venus, being in Scorpio, has some rough edges that need polishing before she can fit into a more genteel social environment.

This is where Venus retrogrades into Libra (also October 31st), the sign of refinement and grace–the qualities which Edward hopes to bring out in Vivian. He introduces her to the hotel manager, who teaches her table manners and points her to a store where she buys expensive clothes. While shopping, Vivian is confronted by snooty workers, who look down on her for wearing such a revealing outfit when she enters the store. This is a socially wounding experience and fits with the yod Venus encounters, forming quincunxes with Juno and Chiron (November 3rd) and it almost throws her off course. Vivian returns to the hotel discouraged, until the hotel manager puts out a special request to another store to treat Vivian well. It seems only men can help Vivian catch a break (aside from Kit), and here we see the trine to Mars formed on November 9th. Now Vivian can shop for clothes which help fuel her transformation from a Scorpion Venus to a more Libran one.

When Venus finally stations in at 25º Libra, Vivian has transformed into a fully realized society woman who charms Edward’s work colleagues and helps him fulfil his ambition. As Venus begins slowly crawling forward towards Scorpio, it re-confronts that yod from Chiron and Juno. It seems that some people don’t think it’s possible to elevate a whore and at this point in the narrative, she discovers that Edward has revealed the secret of her past to his lawyer, who assaults her. Vivian is so hurt by this treatment, she threatens to separate from Edward. Once again, the unexpected happens (Venus opposes Uranus on November 30th) as Edward doesn’t reject, but accepts her. He reveals his true feelings for her and the ways his value system (also represented by Venus) has fundamentally changed as well. He realizes that life isn’t all about material acquisition, so he drops his ruthless ambition in favor of focusing on his emotional and relational needs.

Here the two characters enter a state of true intimacy: just in time for Venus to move back into Scorpio (December 2nd), Vivian finally kisses Edward on the mouth while making love–it’s a symbolic testament of their Scopionic intimacy and it inspires future commitment from him, just as Venus is revisiting the sextile to Saturn (December 16th).

Venus’ journey from Scorpio back into Libra and then forward again into Scorpio ends on December 17th, when Venus arrives at the same degree of Scorpio where her journey began. This was necessary–this woman of the underworld had to return to the manners of Libra before she could proceed through the rest of Scorpio into true relatedness and beyond. Only now is she ready to engage in the higher expression of Plutonian relationships, characterized by enduring commitment, unflinching honesty and authentic intimacy. This is the sign that can look into the darkness of a partner, and into one’s own darkness too, and transform it into relationship gold. By the film’s end, each partner comes away feeling they have found a diamond in the rough, and that through careful cultivation, its shine is finally revealed to be of real value, inside and out.

Back to the main Venus Retrograde page