2023 will bring some major shifts to our collective consciousness. The most monumental of these changes involves Pluto, the lord of the underworld. This year, Pluto is leaving Capricorn, where it has been for 15 years, and entering Aquarius.

Pluto first enters the fixed air sign Aquarius March 23, 2023. This marks the beginning of his grueling 20-month long transition out of Capricorn. First, he will retrograde several times back into Capricorn, then move direct into Aquarius. Finally, he will enter Aquarius for good November 19, 2024.

Below are the dates of Pluto’s movement over the Capricorn-Aquarius cusp. These dates will likely be accompanied by significant transformative energy in the area of government, politics, social structures, and human rights. 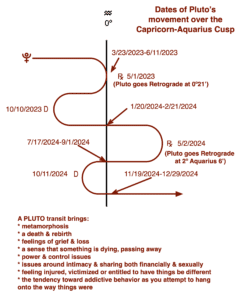 The End of an Era: Pluto in Capricorn

Pluto first entered in Capricorn in 2008. Interestingly enough, his transition into Capricorn was marked by the most devastating financial crisis since the Great Depression. The following 16 years or so featured the serious dismantling of traditional power structures. This time revealed the widespread corruption of those in power.

For example, the Me Too movement highlighted the ubiquitous presence of sexual harassment and abuse, perpetrated largely by men in positions of power. Furthermore, this led to cancel culture, where the dark truth of misconduct was openly discussed in the public arena. Thus, reputations were the subject of harsh transformation.

Over the course of the last 15 years, we have become all too aware of the corrupting nature of power. Quite literally to Pluto’s realm of taboo, we saw sex trafficking on a massive scale a la Jeffrey Epstein, involving many people in positions of power. We also saw massive transformation of conventional standards and the dismantling of tradition.

Pluto in Aquarius: Transformation of Ideals

Pluto in Aquarius will unfold a new era of transforming toxicity in the realm of politics, humanitarianism, social justice, science, technology, social media, and the internet. Additionally, this transit will affect our notion of freedom and free speech. We will experience revolution surrounding our relationship to power and control.

It is possible that artificial intelligence may continue to develop down a path reminiscent of the long-unheeded warnings of dystopian science fiction. Alternatively, we may experience a crisis in lack of tolerance for different kinds of people. After all, Aquarius is the sign of humanitarianism.

Pluto will be in Aquarius for 20 years.

Transits of Pluto and Pluto Retrograde

For more on the Pluto archetype, read this.