By JamieMarch 30, 2014September 27th, 2021Astrology for Non-Astrologers, Astrology for Students, Mars
No Comments 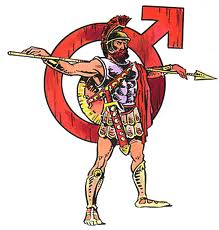 The Warrior in the Sign of Grace–Wha?
Mars is spending about 12 weeks retrograde this year (from March 1 to May 19, 2014) and is traveling through Libra.  This is an uncomfortable sign position for Mars.  Mars is the Hero, the Warrior, the Pioneer, the Athlete, while Libra is concerned with beauty, grace, fairness, tact and diplomacy.  Thus Mars in Libra is the expert negotiator, the verbal sparring partner who pushes every point, the ultimate litigator.  It’s hard for Mars to do his usual job in Libra—he’s supposed to fight, to guard the perimeter, to be aggressive, and all these things are exactly what Libra hates most.  Mars in Libra will do everything to avoid a fight, and will try other tactics first, such as persuasion, charm, even seduction, before resorting to fighting.  Even then, fighting takes a verbal form and Mars wishes to come out smelling like a rose.  When it comes down to physical fighting, Mars would rather retreat until the battle can be joined on a more intellectual field.

Iron Peeps of the Past
Not that I’m saying Mars in Libra is a slouch in the battle department—far from it.  Some famous Mars-in-Libra individuals of the past include Margaret Thatcher, the “Iron Lady,” well known for her stubborn, uncompromising negotiating style and Winston Churchill, whose use of the phrase “Iron Curtain” (in his “Sinews of Peace” speech) led to this phrase’s common use throughout the Cold War and up to today.  It’s no coincidence that both these phrases contain iron and refer to martial strength.

But there’s something Mars in Libra hates more than fighting, and that’s injustice.  In defense of the weak, the disenfranchised, the unfairly accused, this Mars rears up and brings all the fierceness he’s got.

Returning to Old Battles
When Mars is retrograde, we’re invited to go back and fight old battles, with the hope that a new resolution will come.  Those who habitually avoid asserting themselves can relearn to fight, and restore balance to their lives.  Habitual aggressors may meet with more resistance than usual—and those who evade rather than defend may find themselves uncharacteristically fighting back.  Some of us may be pushed against the wall, forced to fight when we don’t want to, but seeing that if we don’t draw a line, someone who really needs help may go undefended.

Mars wants to know:
Where’s your battleground?
Can you resolve an old battle once and for all?
Can you learn to fight effectively, but in a more gracious way?
Can you engage in fair fighting?

If you read my blog, then you know Pluto and Uranus are busy “toppling the Great Edifice” right now. Read more about Mars Retrograde and its interaction with the intense T-square involving Jupiter, Pluto and Uranus, that’s in the sky now (spring of 2014): Who Invited Jupiter To The Party? And Who Said Mars Could Crash It?

Is Mars bugging you?
If you want to find out how this tricky transit affects you,
contact Jamie about a reading.