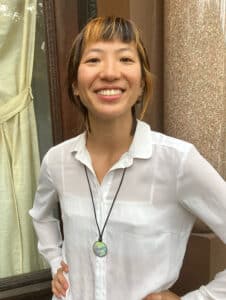 Fran is a musician, poet, and artist. She was born to two immigrant architects and grew up in New York. Fran’s mother read Greek myths and fantasy to her every night in her early childhood. This dawning influence stoked in her an insatiable appetite for stories and words, and planted seeds of an interest in symbolism.

She attended Vassar College, where she studied literature, philosophy, and experimental music. Drawn to reconnect with her mother’s lineage, Fran spent half a year playing gamelan in Bali. It was there that her consciousness subtly shifted and the dormant influence of her heritage bloomed (characterized on both sides by a diaspora throughout Asia spurred by the Chinese cultural revolution). Being in and speaking the language of a place where the existence of magic was assumed made the first cracks in the agnostic, rationalist framework of her life as a first-generation American.

When she arrived back in New York, she became deeply interested in astrology and the I Ching. She came to trust astrology’s grounding in (and even influence on) geometry and classical mathematics as much as its riffing on the lyrical symbolism of psychological archetypes. Obsessively self-taught, Fran read everything she could get her hands on (Liz Greene, Karen Hamaker-Zondag, Stephen Arroyo, Donna Cunningham, Robert Hand…), and scoured the charts of friends, strangers, and historical figures with great enthusiasm. Around the same time, she became interested in Jungian Psychoanalysis, and applying this framework to astrology eventually led her to a deeper understanding of how astrology is useful as a psychological, spiritual tool for self-understanding.

Fran found the periodic mentorship of an astrological whiz who applied his scintillating astrological insights to futures trading, among other things. Other than that, she remained self-taught. Unsure how to most ethically use astrology as a counseling tool, Fran did not leap into giving professional readings, although she was asked to (and obliged) several times throughout the years. She taught a few fundamentals classes, but mostly researched and wrote on the topic. Fran’s extensive immersion in astrology led to a crisis of faith, ultimately resulting in a rebirth of appreciation for it. After much soul-searching, she arrived at the realization that astrology is not for the prescribing of our fate, but instead a valuable tool for self-realization via the naming, differentiating, and recognition of unconscious complexes, allowing for a human to embrace meaningful change.

Fran first met Jamie in 2013, upon getting her first professional reading. It was then that Jamie made her aware of her abundance of natal quincunxes and set her on a journey to explore the more obscure and mysterious spaces in astrology. When Jamie put out an inquiry for a co-writer 8 years later, Fran responded because she needed a job and had experience writing about astrology. She eventually entered into apprenticeship with Jamie, and this time her influence was an earthy one about solidifying fundamentals, simplifying approach, and practice.

Fran believes that an astrologer who tells you who you are, as if it’s carved in stone, and pronounces your fate as a negative, is not a good astrologer. Her intention in her practice is to respect you-the-client as the ultimate authority on yourself, to aid you to untangle unconscious influences, and to bring the best of you to light.